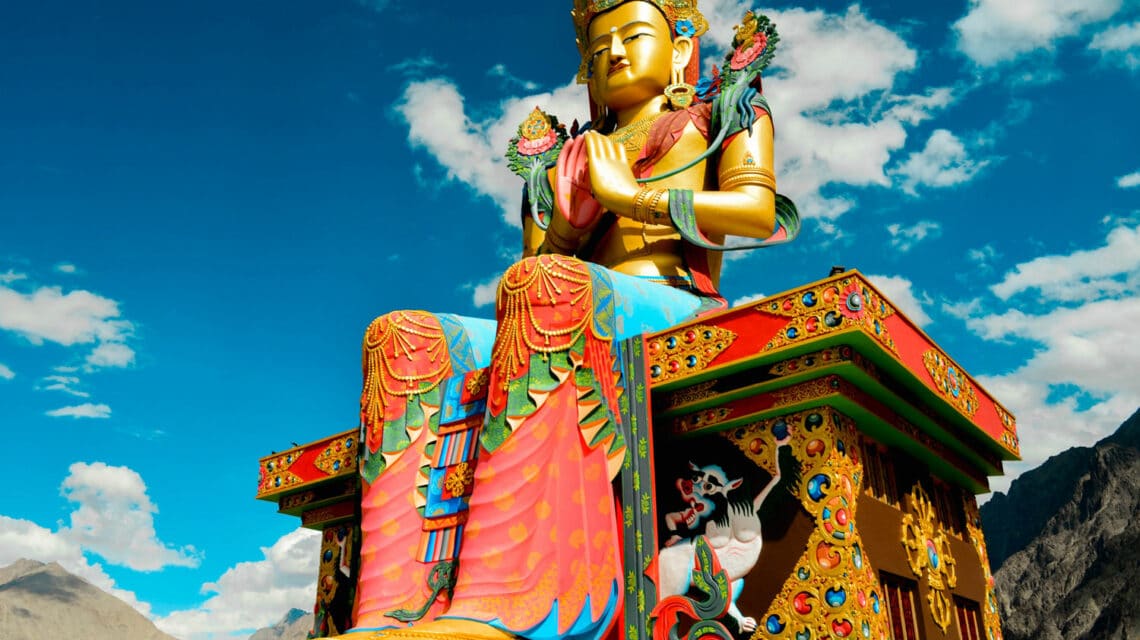 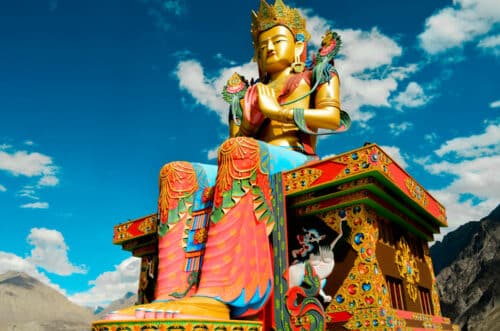 Nature is at her best in Leh-Ladakh. The sheer excitement of an adventure amongst the mountains and the valleys is probably the first picture that may enter your mind when you hear the word Leh or Ladakh. Adventures always bring with them the thrill of exploring something new and previously unknown, and Leh-Ladakh’s festivals offer a rich adventure into the culture. Here are a few festivals celebrated in Leh-Ladakh that are as unique and delightful as the landscape itself –

Losar is the Ladakhi New Year. It is traditionally celebrated two months in advance and festivities begin on the 29th day of the 10th month of the Tibetan calendar. Officially, the festival begins on the first day of the eleventh month. Losar has high socio-cultural significance. The celebrations are a mix of ancient rituals and traditions. Dancing, music, drama and merry making mark the auspicious celebration. People make offering to the Gods. Doors, kitchen walls, wooden columns are decorated with auspicious images and symbols such as the Ibex deer. The ceremonies usher in the new year and bid farewell to the old year. These ceremonies represent a struggle between good and evil.
Where: All over Ladakh
What to look out for: Chang, a locally made barley beer
When: As the festivities take place as per the lunar calendar, the dates change every year.
8 December 2018
27 December 2018

The Hemis Tse Chu festival is a monastic festival that celebrates the birth anniversary of Guru Padmasambhava, the founder of Tibetan Buddhism. This vibrant festival lasts two days. It is celebrated every twelve years. The victory of good (the Gods) over evil (the Demons) is the theme of this festival. The masked dances depicting the feats of Padmasambhava, vibrant outfits and the unique music consisting of sounds made by drums, cymbals and trumpets are the highlight of this festival. The festival culminates with a sacrificial offering on the last day.
Where: Hemis Gompa (45 kilometres south of Leh)
What to look out for: The ceremonial dances (Chamms) which are performed by lamas with masks and elaborate headgear.
When: 11 July to 12 July 2019

Yuru Kabgat is an essential for the followers of Buddhism. It is a Sacred Dance Drama festival dedicated to Padmasambhava and Yama. This two-day festival enjoys immense popularity worldwide and Buddhists and Lamas from Japan, Tibet, China and Korea make their way to Lamayuru Monastery to attend the festivities. This festival offers an invaluable opportunity to gain insights into Buddhism as practiced in Leh-Ladakh. The masked drama which aims to appease the deity is the highlight of the festival. It is also believed that the dances ward off evil and protect the people from disease and disaster. The Yuru Kabgyat dance is performed by Lamas who dance in circles. The masks worn during the festivities are often made of paper mache.
Where: Lamayuru Monastery
What to look out for: Prayer wheels, elaborate masks.
When: 29 July to 30 July 2019

A two-day festival that celebrates the victory of good over evil. Every third year of the Tibetan calendar, an enormous and elaborate thangka is unveiled. The festival begins with prayers to Skyabje Jigten Gombo, the saint and founder of the Dringungpa monastic order. This festiva is distinguished by sacred masked dance drama, monks in colourful robes and worship of the thangka of Jigten Gombo. The festivities end with the destruction of the Storma on the final day.
Where: Phyang Monastery (17 kms west of Leh)
What to look out for: The Thangka, Buddhist artefacts for sale.
When: 30 July to 31 July 2019

The festival of oracles is held annually, a week before the festival of Matho Nagrang. This festival is special as it involves sacred masked dances along with laymen oracles. These laymen oracles are spiritually cleansed and trained by the priests from the Spituk Monastery to receive the spirits of the deities. The people of the region have great faith in the predictions from these laymen oracles.
Where: Stok village, in the Gurphug monastery (20 kms south of Leh)
When: The ninth and the tenth day of the 1st month of the Tibetan calendar.
15 February to 17 February 2019
What to look out for: The predictions of the oracles.

The Matho Monastery is the only Monastery belonging to the Saskya-pa order. It is believed to be about five hundred years old and is home to about 60 monks. The Matho Nagrang is the annual festival of the monastery. Matho oracles are well known all over Ladakh for their prediction of future events and answers to questions. For this practice, lots are picked and the monks chosen isolate themselves and undergo meditation for two months in order to prepare themselves for the spirits. The two oracles who receive this honor are known as ‘Rongstan’. They enter a state of trace and are capable of performing astonishing feats along with their predictions.
Where: Matho Monastery (26 km east of Leh)
When: 18 February to 19 February 2019 (14th and 15th day of the 1st month of the Tibetan calendar)
What to look out for: Feats and Predictions by the Matho oracles

This festival is organized by the Jammu and Kashmir tourism department to celebrate, promote and preserve the rich cultural heritage of Ladakh. Agriculture is an important occupation on in Ladakh. Harvest is an occasion of celebrating and merry making and is celebrated with a variety of cultural programs. These include folk dances, traditional music, ceremonial costume, archery and masked dances. A Central Asian trade market is held in Leh Bazaar. The grand festivities come to an end with a parade that passes through Ladakh’s streets.
Where: Leh
When: 1st September to 15th September 2018/ 2019
What to look out for: “Ladakh Festival Cup”- the Polo tournament

Also known as Buddha Purnima or Vesak Day, Saka Dawa is marks the birth, enlightenment and death of Lord Buddha. Celebrated as the holiest Buddhist day, Saka Dawa is celebrated annually with great enthusiasm. Sacrificial offerings, prayers and ceremonial masked dances preformed by the lamas mark this celebration. People avoid eating meat and killing animals. On the streets of Lhasa a large number of people turn their prayer wheels and take part in the walk around the city.
Where: All over Ladakh
When:  17 June 2019 (4th month of the Tibetan calendar.)
What to look out for: Flag pole changing ceremony performed by lamas of adjoining monasteries.

Dosmoche is an annual prayer festival which was started by the rulers of Ladakh. Dosmoche means ‘Festival of the Scapegoat’ It is one of the two New Year festivals. Sacrificial offerings are burnt in an effort to protect the people from natural calamities and banish evil spirits. Lamas from all over Ladakh are chosen on a rotational basis to perform the sacred masked dances in in the courtyard below the gates of the Leh palace. As per the tradition, storma are burnt.
Where: Leh, Diskit, Likir.
When: 2 February to 3 February 2019 (On the 28th and 29th day of the Tibetan month)
What to look out for: The large, decorated wooden mast set outside Leh.

Gustor festival celebrates the victory of Good over evil and the birth of Tsongkha-pa, the founder of the Geluks-pa monastic order. It is a two-day festival and is held simultaneously in several monasteries. Gustor means ‘sacrifice of the ninth day’. The festival begins with an offering to the Gods for protection. Monks perform sacred dances in colourful masks and attire. A sacrificial dough figure (Storma) is burnt at the end of the celebrations.
Where: Thiksey, Karsha and Spituk
When: 9th month of the Tibetan calendar, dates vary according to the Monastery.
Thiksey:
27 October to 28 October 2018
15 November to 16 November 2019

What to look out for: The ceremonial dances.

« Planning a trip to Ladakh
Acclimatizing in Leh-Ladakh »